Triumph Of Bacchus Is Back In Stock. Supplies Are Limited. Shipping Available For All EU Countries And To The UK. Dismiss

American born model, actor and successful real estate developer Christian Petrovitch is of Italian & Russian decent. His modeling career took him around the globe to the most exotic locations. Mr. Petrovich has graced the cover of many romance novel covers, began a successful modeling career that spanned over two decades and has taken part of dozens of fashion shows from New York, Milan, Paris, Dallas and Miami. Mr. Petrovich is an award winning actor and has played various rolls in several movies and television productions.He has a passion for real estate and is a rental property owner and land developer based in Dallas, Texas USA.  Christian turned his passion for fashion and fragrance into a full time luxury niche fragrance house.  Creating bespoke, private label fragrances for Europe’s elite as well as celebrities.

After several years working and creating the highest quality fragrances for others Mr. Petrovich decided to launch Argos Fragrances publicly in 2018.

At Argos Fragrances our goal is to make the most memorable fragrances with the purest and finest ingredients. We create luxury scents that can be enjoyed by all. From the scent enthusiast to the most discerning fragrance connoisseurs.

Our unique fragrances are influenced by Christian’s many travels as well as Greek and Roman Mythology. Each Argos Fragrance retells and ancient legend.

Argos Fragrances’ are timeless, cross cultures and have no refrain. We want to engage all senses and leave an everlasting impression. At our state of the art lab in Nice, France our unique blending and maceration processes bridges the gap between the modern world with all its advancements and conveniences, and the old where timeless traditions, meaning, and attention to detail are paramount.

Argos Fragrances’ are created using the finest natural ingredients from around the world and are produced in our private lab in Grasse, France. Using state of the art equipment and time-honored techniques, make our high-quality fragrances as uniquely memorable as they are satisfying.

The result of several years of formulating and reformulating has resulted in the creation of five genuinely unique and beautiful Argos Fragrance creations designed to stimulate and attract by arousing the most powerful of our senses. You will be remembered, wearing Argos Fragrances.

“Fragrance Is The Subtle Kiss That No One Sees.”

Working with my first client who happened to be Greek and also major shipping businessman I was able to put my extensive knowledge of Greek mythology to use.

Argus Panoptes (or Argos), (Ἄργος Πανόπτης), is a many-eyed giant in Greek mythology. Argos was a primordial giant who was all-seeing.  He is described with multiple, often one hundred, eyes.

In the photo above Mercury, Argos are depicted by Abraham Bloemaert (circa 1592) with a theme of stealth and murder.

Argos was given a mythic role, set by Hera as a very effective watchman.  If you are a Greek Mythology buff then you will know of all of Zeus’s digressions and wondering ways.  Hera in affect had Argos watch and report back to her on Zeus.

Argos was able to accomplish this task due to his having so many eyes that only a few of the eyes would sleep at a time: there were always eyes still awake.

To free himself Zeus had Argus slain by Hermes (Mercury). The messenger of the Olympian gods, disguised as a shepherd. Hermes played his magical flute which put Argos completely to sleep, then Argos was killed by Hermes.

Hera commemorated her faithful watchman.  She had the hundred eyes of Argos preserved forever, in a peacock’s tail.

ARGOS - THE DOG AND ODYSSEUS 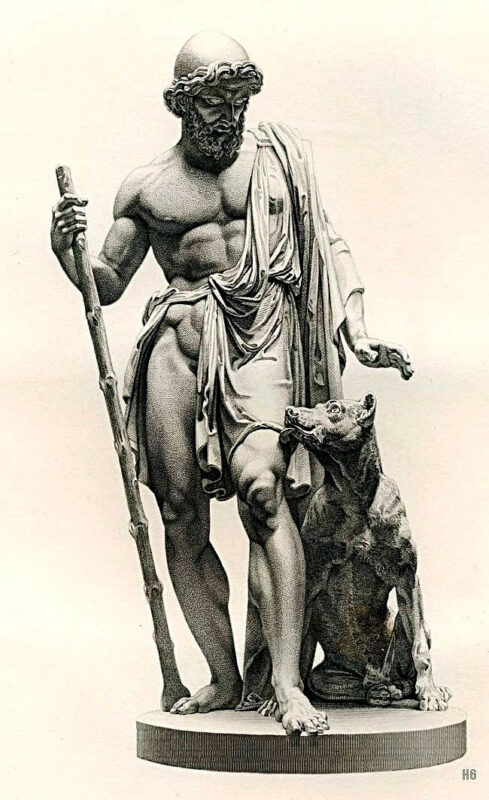 ARGOS THE DOG AND ODYSSEUS

This story brings to mind that a memory connection to the strongest and most primal of our 5 senses, our sense of smell.

Even though Argos hadn’t seen his master in over 20 years he recognized him immediately.  Argos was old, dying and was not able to hear Odysseus because he did not call to him, was not able to touch, taste or see him but the dogs sense of smell was just as keen as ever and the memory of his master was forever etched in his heart.

In Homer’s Odyssey, Argos is Odysseus’ faithful dog. After ten years fighting in Troy, followed by ten more years struggling to get home to Ithaca, Odysseus finally arrives at his homeland. In his absence, reckless suitors have taken over his house in hopes of marrying his wife. In order to secretly re-enter his house to ultimately spring a surprise attack on the suitors, Odysseus disguises himself as a beggar, and only his son is told of his true identity.

As Odysseus approaches his home, he finds Argos lying neglected old and very tired. This is a sharp contrast to the dog Odysseus left behind; Argos used to be known for his speed and strength and his superior tracking skills.

Unlike everyone else, Argos recognizes Odysseus at once and he has just enough strength to drop his ears and wag his tail but cannot get up to greet his master.

Unable to greet his beloved dog, as this would betray who he really was, Odysseus passes by (but not without shedding a tear) and enters his hall, and Argos dies. The simplicity of the relationship between Argos and Odysseus allows their reunion to be immediate and sincere. 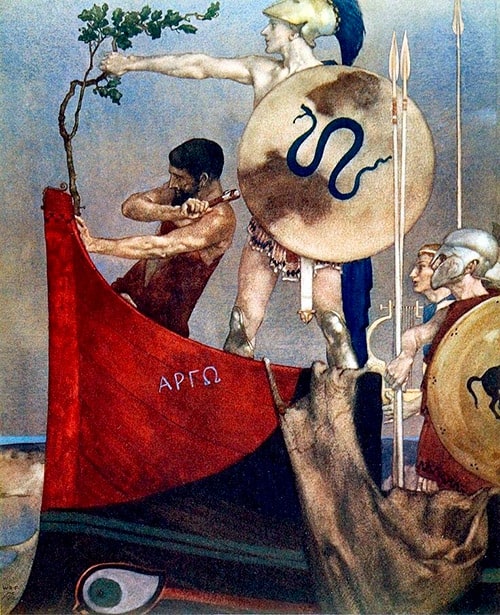 In Greek mythology, the Argo (/ˈɑːrɡoʊ/; in Greek: Ἀργώ, meaning ‘swift’) was the ship on which Jason and the Argonauts sailed from Iolcos to Colchis to retrieve the Golden Fleece. She was named after her builder, Argus.

The Argo was constructed by the shipwright Argus, and its crew were specially protected by the goddess Hera. The best source for the myth is the Argonautica by Apollonius Rhodius. According to certain sources, the Argo was the first ship to sail the seas. According to other legends, Argo contained in her prow a magical piece of timber from the sacred forest of Dodona, which could speak and render prophecies.

After her successful journey, the Argo was consecrated to Poseidon in the Isthmus of Corinth. She was then translated into the sky and turned into the constellation Argo Navis.

THE CITY OF ARGOS 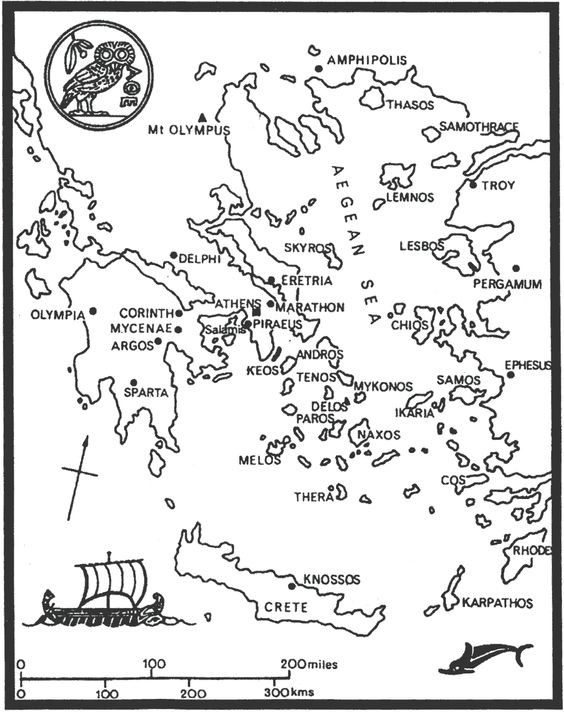 THE CITY STATE OF ARGOS 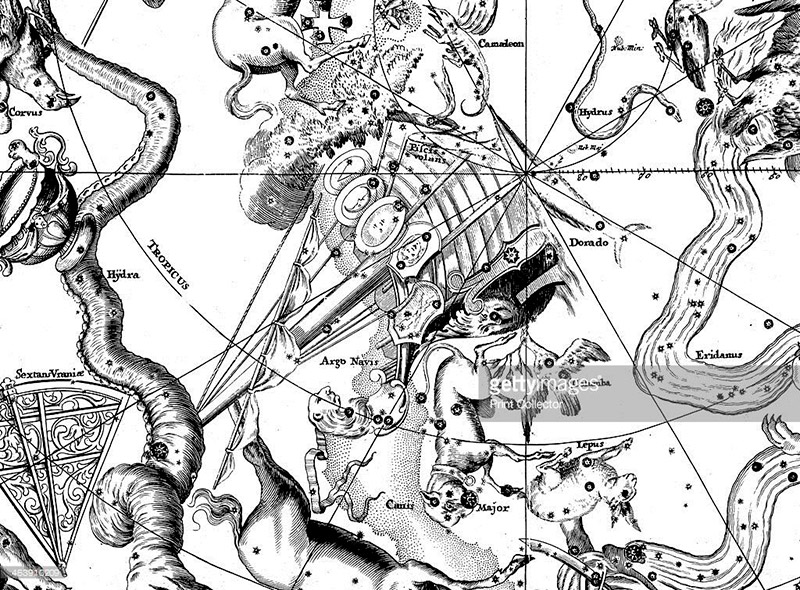 The Egypt Connection and Birth of Man
http://www.greecetravel.com/greekmyths/argos1.htm